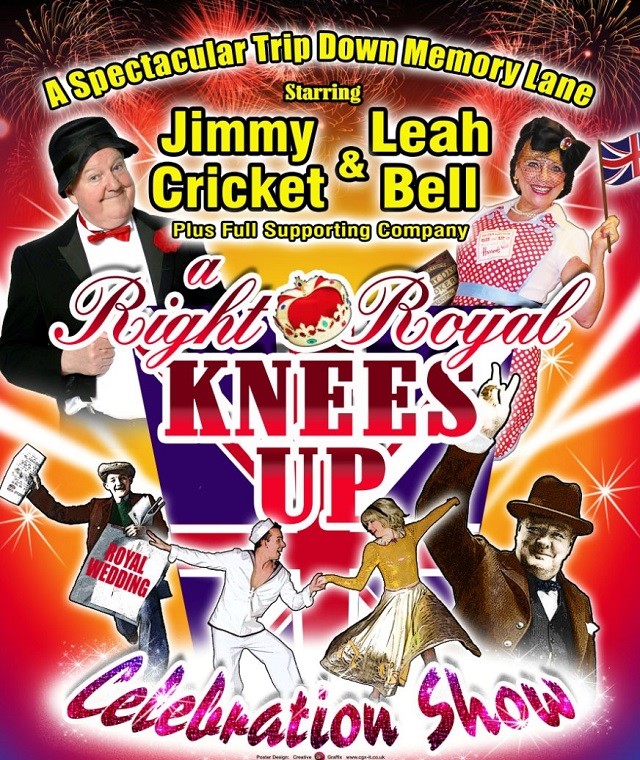 A RIGHT ROYAL KNEES UP

A RIGHT ROYAL KNEES UP

This feel-good performance is packed with show-stopping scenes, sing a long memories and spectacular footage as we take a nostalgic journey through the seventy-year reign of Queen Elizabeth the Second.

Guaranteed to put you in the party mood, this once in a lifetime performance will get your spirits soaring, your hands clapping and your voices bellowing out as we bring you to our rousing flag waving finale.'

There is no better way of celebrating Her Majesty the Queens Platinum Jubilee, than by joining us for A RIGHT ROYAL KNEES UP. 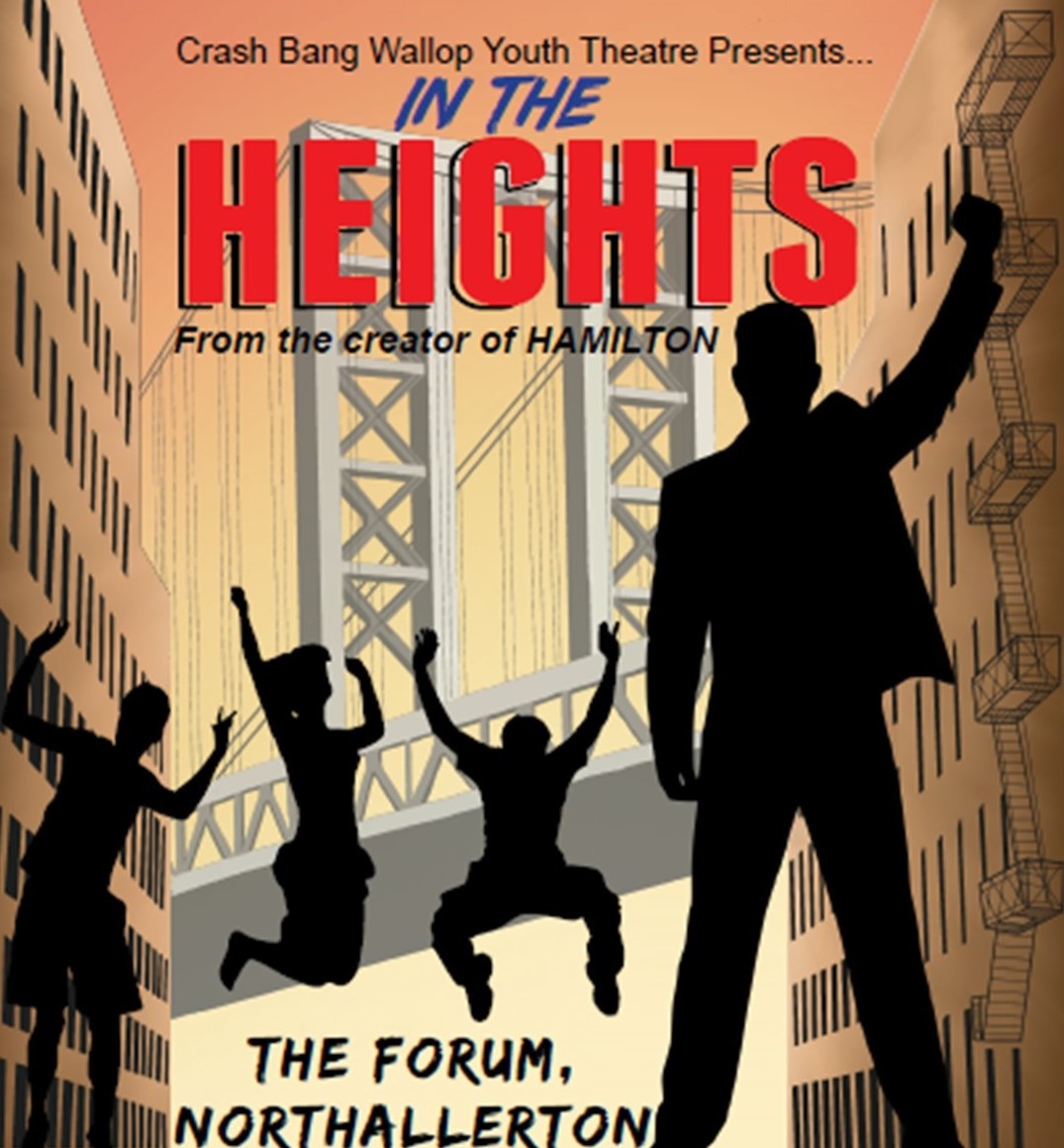 IN THE HEIGHTS - CBW

CBW Youth Theatre are excited and proud to present to you our award-winning production of ‘In the Heights’, a joyous and fast-paced musical from the pen of the creator of ‘Hamilton’, Lin-Manuel Miranda, which has played to packed audiences all around the world, and has recently become a well received feature film. In 2019 CBW won nearly every NODA award going as one of the first Youth Groups to perform this amazing show!

It’s a hot, hot summer in Washington Heights, Manhattan, as the residents of the street go about their daily business, doing their best to get by. Most of them have come here from all over Central America looking for a better life-there’s the girls who work in the hair salon; the hardworking couple who run the taxi company, slaving away all hours to earn enough to send their clever daughter to University; the  local graffiti artist, and the piragua guy, keeping everyone cool with his ice cones. They are introduced to us by the central character, the owner of the Bodega, Usnavi – so called because his parents named him after the first thing they saw on their arrival; a ship bearing the logo U.S. Navy.

All the inhabitants of the street are watched over by Abuela (grandmother) Claudia, who has fed the birds and cared for a whole generation of children and families for as long as anyone can remember.

The central themes of the musical are about home, belonging, community, the restless desire to move on, or stay put, to find a better life, somewhere…. the love stories are ‘grown-up’ versions of the familiar boy meets girl, everyone lives happily ever after, and are more complex and truer to life. The quick fire humour sparkles, and the music and dancing evoke the sultry heat of a Latin summer.

The cast of CBW are so thrilled to be performing this show again, and would love to share their joy and energy with you.

Book now to be sure of your place at the street party of the year that is ‘In the Heights’!

CBW Youth Theatre’s shows are always met with much enthusiasm and praise, and they recently won nearly every NODA Youth Award going for their fabulous production of ‘In the Heights’. Comments from their previous shows, include “such talent, professionalism and energy from the whole cast and crew”, “I can’t believe they are not professionals!”, “I’ve never laughed so much at a live show”, “such fab comic timing, had the whole audience in stitches”, “the  obvious enjoyment and confidence of the cast is plain to see”, and “can’t wait for the next production”.

So book early, to avoid disappointment! 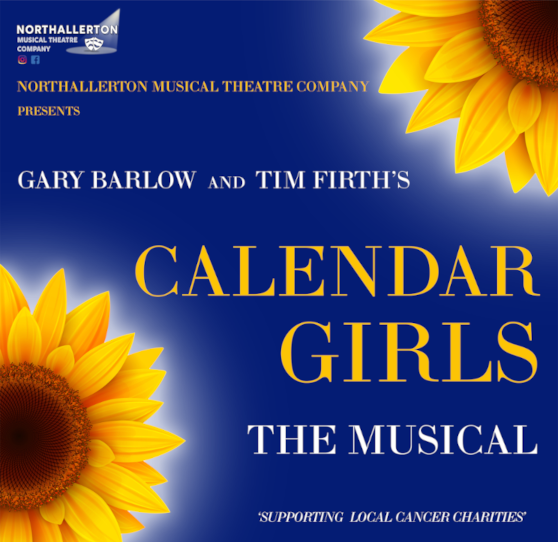 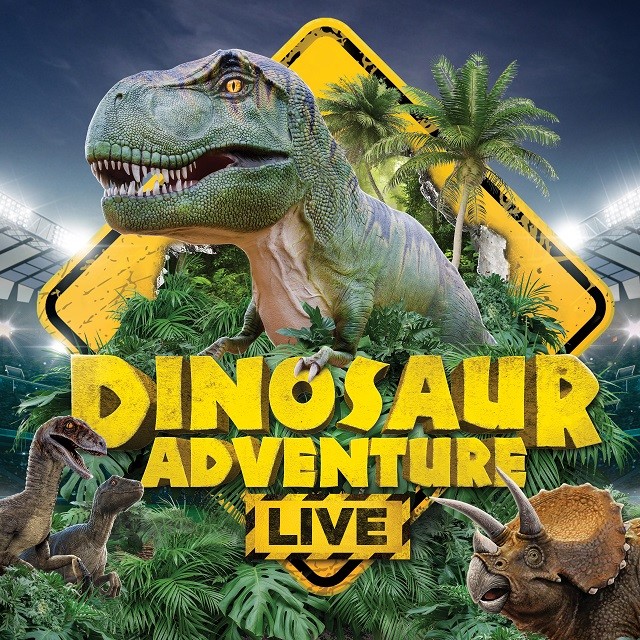 “The Greatest Prehistoric Show on Earth” 65 million years in the making... Are you ready for the adventure?

Join our intrepid Dinosaur Adventurers as we journey to a world of living, breathing, life-like Dinosaurs.Walk with us through the Jurassic era on an unforgettable interactive experience as we

introduce you to some of the most incredible species ever to have lived on Earth. Feel the excitement of meeting real life-like Dinosaurs face-to-face and hearing the tremendous roar of a T-Rex. Learn their history and even feed them but watch out – you could be on the menu.

This awe-inspiring stage show captivates both young and young at heart, immersing audiences in an enthralling & realistic world of Dinosaurs. You won't want to miss this adventure of a lifetime, so hold onto you hats as this show will blow you away! "It's Totally T-rex-iffic" 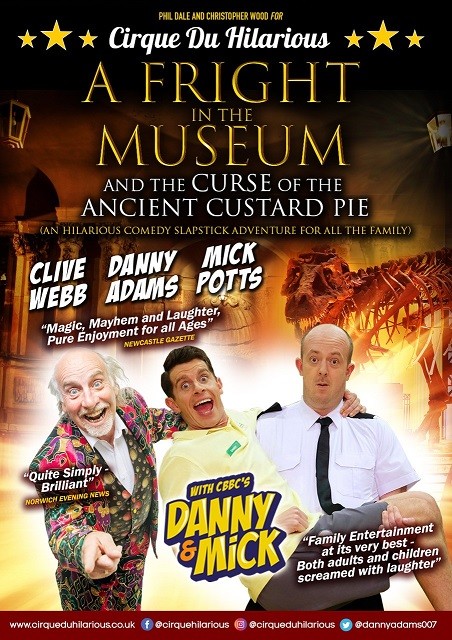 A FRIGHT IN THE MUSEUM

‘A FRIGHT IN THE MUSEUM’

(And The Curse of The Ancient Custard Pie)

Danny & Mick & their dad Clive have decided they don’t make enough money from their circus, so they get themselves part time jobs as night watchmen in the museum to make ends meet. However, things do not go according to plan when they disturb the ‘Ancient Custard Pie’ and release the ‘Phantom of Slapstick’. They soon realize they are not alone when the museum comes to life at the stroke of midnight and chaos breaks out!

This years show is packed full of hilarious comedy routines, magic, mayhem, slapstick and specialty acts, making it a laugh out aloud show not to be missed for the whole family! 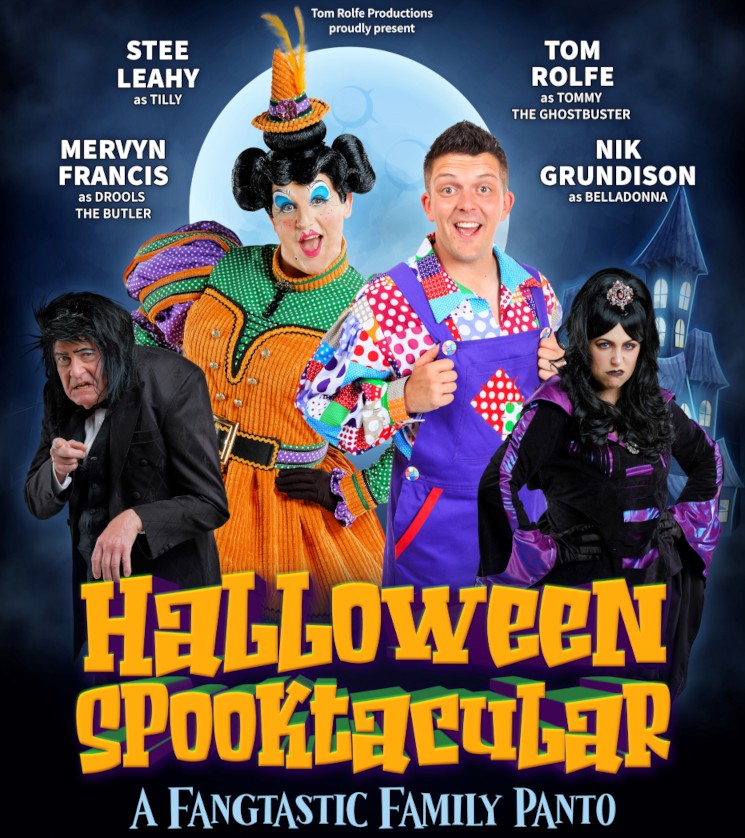 A spooktacular pantomime is coming to The Forum Northallerton this October. Oh yes it is!

Brought to you by the same team behind the last years production ‘Pirates of the Spooky Lagoon’ Tom Rolfe Productions can’t wait to present their latest spooktacular TREAT full of plenty of TRICKS this Halloween.

All is calm at Creaky Towers until the wicked Belladonna reeks havoc on the Halloween party because she doesn’t receive an invitation! Will Tommy the Ghostbuster manage to save the day? Will everyone live happily ever after? Find out by booking your tickets today!

This is a very family friendly show with plenty of fun for everyone with nothing anymore scary than any other pantomime. 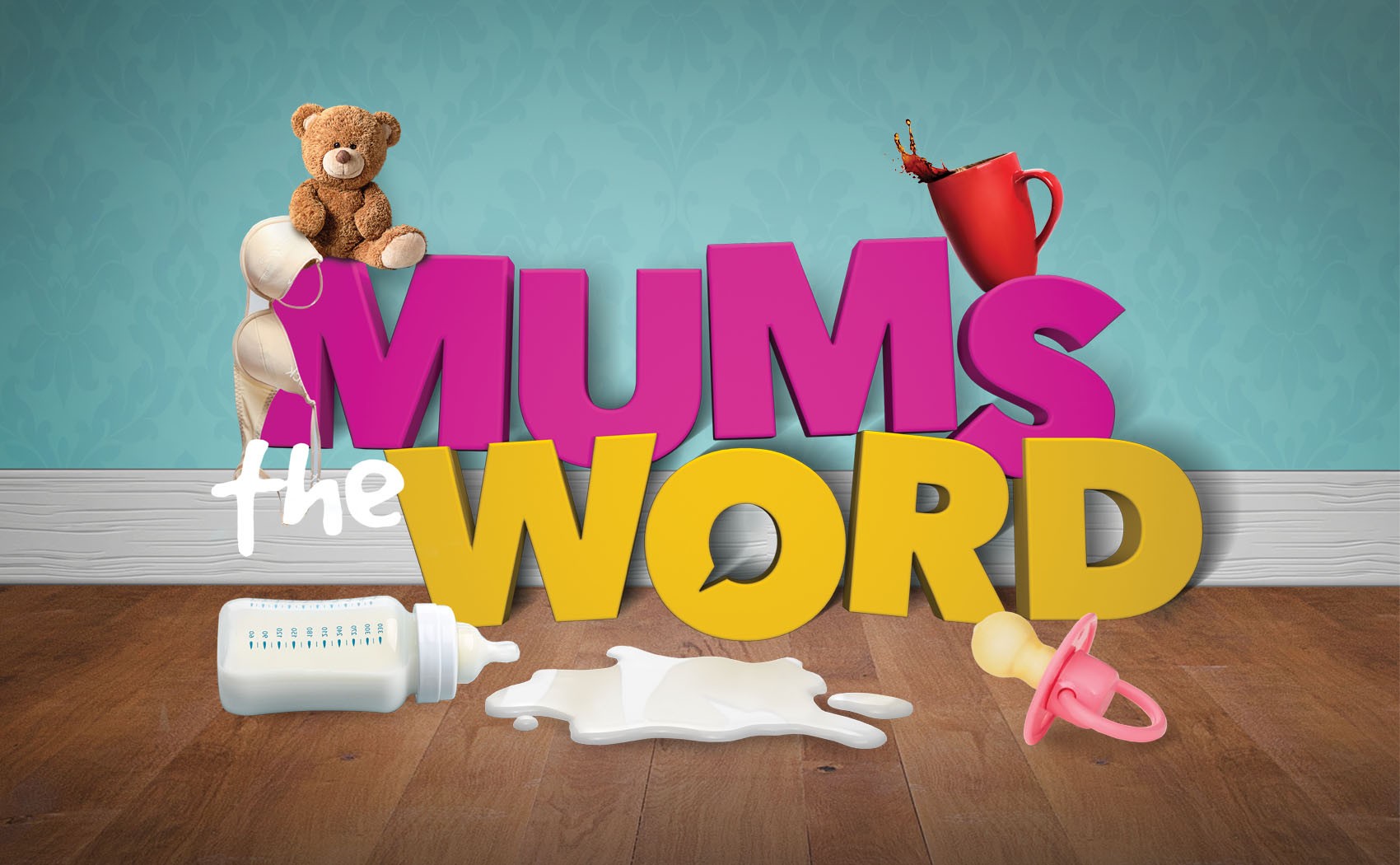 The Mother of all Shows. The stuff nobody tells you about parenthood...until it’s too late. Whether it’s leaving the house without your bra, crying in the Supermarket aisles for no reason, or secretly thinking you had given birth to E.T. You won’t feel alone when listening to these women portray the “beauty” of bringing new life into the world...or forgetting where they left it.

An uplifting, honest, heart-warming show that will have you both roaring with laughter and reaching for the tissues. Mum's The Word takes you on an emotional ride through pregnancy pitfalls to teenage tantrums.

If you’re a mum-to-be, about to have your first grandchild or even the cat’s mother in need of a witty romp through the trials and tribulations of parental life, then this is the show for you. For all the men who want to know what women want - please take your seats. 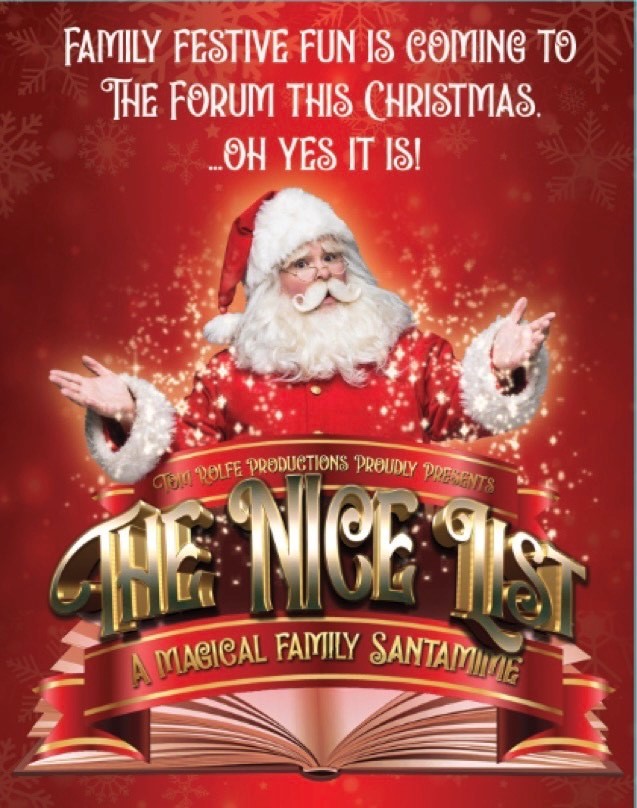 Family festive fun is coming back to The Forum this Christmas, oh yes it is!

Missed out on the family fun last year? Why not join Santa and his cheeky elves ‘Peas and Carrots’ live on stage in our fun-packed family pantomime as they prepare for a Christmas like no other.

All is going well in The Workshop until Grudge the grouchy gnome steals the nice list! After much comedy chaos, magic and mayhem the nice list is nowhere to be seen! Will they find it in time? Will Christmas be cancelled? Will Santa and his elves manage to save the day? Find out by booking your tickets today!

Our toe tapping, jingle belling, Christmas cracker of a show is guaranteed to get you in to the festive spirit, singing along and rolling the aisles with laughter in time for Christmas Eve.

Free gift for each child ticket purchased! Spot prizes for the best Christmas jumper too!